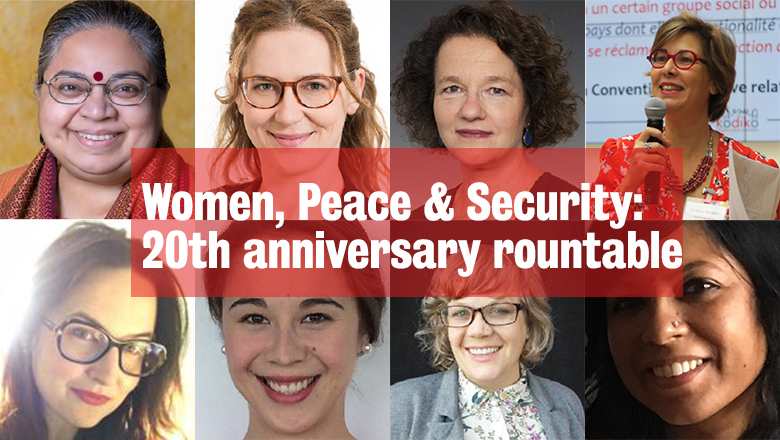 This autumn marks the 20th anniversary since the UN Security Council unanimously adopted Resolution 1325 on Women, Peace and Security (WPS). A huge milestone, it finally promised mainstream attention to women’s perspectives on and experiences of war, peace and security which women’s rights activists had been pursuing for over a century.

Join us to celebrate this momentous anniversary with a roundtable of key experts and practitioners discussing the WPS agenda’s past, present and potential futures.

This event will be chaired by Dr Amanda Chisholm and Dr Andrea Ellner.

The event will be held on Zoom, registration is required via Eventbrite and the joining information will be sent 48 hours before the event.

This event will be livestreamed to our War Studies Youtube channel and recorded.

Soumita Basu is Assistant Professor of International Relations at the South Asian University, New Delhi. She is also a Research Fellow at the University of the Free State, Bloemfontein. Her most recent publication is a co-edited volume, New Directions in Women, Peace and Security (Bristol University Press, 2020), with Paul Kirby and Laura J. Shepherd.

Dr Amanda Chisholm is a Senior Lecturer researching and teaching on gender and security across both War Studies and Defence Studies. Her research focuses on the privatisation and decentring of global war-making. Her work is located at the nexus of Feminist International Relations, Global Political Economy, and Security Studies. She employs ethnographic methodologies to examine the racial and gendered aspects of private military and security companies’ (PMSCs) global operations. Her work is concerned with how gendered and racial logics sustain difference, assign value and reproduce hierarchies amongst these workforces and the ways in which these security market relations involve household labour. Having recently been awarded an Economic and Social Research Council Future leaders’ grant, her current work looks at issues of (un)ethical recruitment practices in unarmed and armed global South security workforces and households.

Dr Andrea Ellner lectures in the Defence Studies Department, King’s College, London at the Joint Services Command & Staff College (JSCSC), Shrivenham. Her research focuses the Women/Gender, Peace and Security (W/GPS) Agenda, gender integration in armed forces, and moral injury in service personnel and ethics of war. She combines historical and contemporary, political, societal and cultural perspectives. As SME for gender, security and the military Dr Ellner has been providing specialist professional military education at JSCSC as well as educational outreach and expert advice to fellow scholars, civilian and military practitioners in British and international contexts. She is currently examining the applicability of contemporary thinking on WPS to historical events, especially the interaction between military personnel and civilians during World War II and the immediate post-war occupation of Germany.

Jamie J. Hagen is a Lecturer in international relations at Queen’s University Belfast where she is the co-director of the Centre for Gender in Politics. Jamie received her PhD from the University of Massachusetts Boston in the Global Governance and Human Security program in 2018. Her work at the intersection of gender, security studies and queer theory appears in a number of peer reviewed journals including International Affairs, and Critical Studies in Security. Jamie was the 2018-2019 ISA James N. Rosenau Post-Doctoral Fellow. For Spring 2019 she was also a Visiting Fellow at the Centre for Women, Peace and Security at the London School for Economics and Politics.

Dr Aiko Holvikivi is a Research Officer at the LSE Centre for Women, Peace and Security and guest teacher at the LSE Department of Gender Studies. Her research covers different thematic areas of the WPS agenda, including gender training, peacekeeping, and forced displacement. Her recent articles appear in European Journal of International Security and European Journal of Politics and Gender. Before returning to academia, Aiko worked in the field of gender and security with civil society and inter-governmental organisations, and her work continues to combine research with policy engagement and stakeholder outreach.

Cynthia Petrigh is an international expert in support to societies in transition with 20 years experience in in the field in West and Central Africa, the Middle-East and South-East Asia. Her Company Beyond peace specialises in providing training and advisory services to armed forces on international norms, ; in supporting peace processes through women’s participation; and in monitoring human rights violations. A member of the UK Stabilisation Unit, she regularly works with the EU, the UN, the OSCE, the Sanremo IIHL and academia. She has supported the peace process in Mindanao as a member of the International Contact Group, the National Dialogue in Yemen and she has created the Women, peace and Security programme for the UN Women in Cameroon.

Swarna Rajagopalan trained as a political scientist and has had an academic and political interest in questions relating to gender and security. She continues to write, academically and in the general media, on WPS topics. Swarna is a founding member of the Women’s Regional Network, a women’s peace network in Southasia and the founder of The Prajnya Trust, a non-profit working on gender equality and peace education. Her portfolio is available at http://www.swarnar.com and she tweets at @swarraj.

Saskia Stachowitsch is a Professor of International Politics at the University of Vienna and the scientific director of the Austrian Institute for International Affairs (OIIP). She was as an affiliated scholar at the Department of Gender and Women’s Studies of the University of California, Berkeley, and as a visiting scholar at the School of Sociology, Politics and International Studies of the University of Bristol. Her research interests are critical security and military studies, feminist and postcolonial theories in international relations, privatization of security, gender and the military, EU border security, transnational actors (e.g. Frontex) and parliamentarianism, antisemitism, and the political history of Austrian Jews.