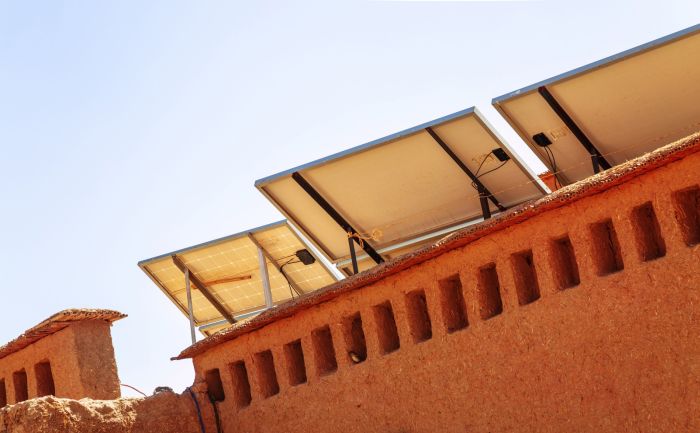 In 2009, Morocco initiated an ambitious energy transition program. The aim is to increase the country’s independence from energy imports until 2030.  The plan targets the reduction of the import of fossils and large investments into renewable energies. The goal set is to meet 42% of its power generating capacity needs through renewables by 2020 and 52% by 2030. Morocco’s bold and ambitious plans are often highlighted as a model for how to invest into future technologies and bring about clean energy transition. Due to its geography, weather conditions and solar irradiance, Morocco is considered to have huge potentials regarding wind and solar energy production. Morocco’s energy transition program includes the construction of a number of large and medium scale solar plants until 2020. Their planning and construction is often managed by MASEN (Moroccan Agency for Sustainable Energy), a public limited company. Recently, Noor 1, the first of several large scale solar plants was completed. Noor 1 is situated in Ouarzazate in the East of the country. Currently Noor Tata is in the planning phase. Similar with Morocco, energy transition has been also a hot topic in Austria. However, different from Morocco, planning, decision-making and governance structures have rather reflected the country’s federal system.

Austria’s energy transition strategy is a decentralized one. As much as this often entails strong involvement and ownership on societal level, as much its success is dependent on a complex set of diverse political entrepreneurs on different political and administrative levels (national-federal-district and local). LINKS project aims at learning from both; Austrian and Moroccan experiences. In its last phase, the project deals with the question whether decentralized small-scale energy production models as implemented in some of the Austrian energy model regions are transferrable to Morocco. This assessment takes place against the background of the Moroccan state’s ambitions to decentralize and strengthen the regional and provincial levels. Accordingly, this report elaborates the structural, political, social and societal setting in which Morocco’s energy policy is embedded. The report tries to define the major actors, analyse the decision-making structures, and review the socio-technical imaginaries which have shaped national energy policies. “Socio-technical imaginaries” define mind-sets and frames which do not only guide policies and strategies but also give insights about the expectations connected with technological developments. The report aims at providing a background for the preparation of the stakeholder forum to be held in Tata/Morocco in October 2017. The forum aims at bringing together local and regional stakeholders and to debate at eye level experiences, expectations and ideas for solar energy production in their region.

This working paper was produced within the LINKS project (Linking climate change mitigation, energy security and regional development in climate and energy model regions in Austria) (funded by the ACRP).